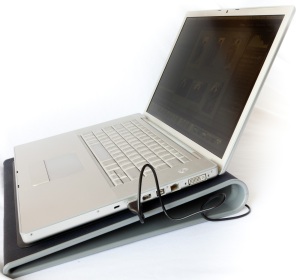 When using a laptop computer for any processor intensive tasks, particularly on a hot day, you have probably discovered that your lap gets rather hot! Lightroom and Photoshop for example can really turn the temperature up on a modern machine and as I have found to my cost, high temperatures reduce the life expectancy of hardware significantly. Fan noise can also be very irritating as the little fans inside laptops have a tiresome high pitch wine.
There are some important basic rules to follow .
Never place your laptop on the bed or other soft surface. Some have vents underneath where air is drawn into the machine by a fan. Even if they don’t it is best to allow cooling air to flow underneath the machine.
When putting your laptop in your bag, leave it to cool down for a few minutes if you can, or if not, place it so the hottest part – or the vent is at the top and leave the bag – or neoprene cover undone to allow hot air to escape. Particulalrly effective with the long slot air vent on all Macs.
If you are working with the machine in bed or on your lap use a tray underneath.
When travelling I have tried many different DIY solutions including spacers to lift the machine allowing more air underneath, heat sinks and metal trays to try to conduct heat away, even resting the machine on bottles of cold water. All work to a degree, but I have now experimented with some more sophisticated solutions, this article looks and tests several different approaches that are suitable for different situations.
1. At home at a desk where a permanent solution can be deployed, ideally raising the screen to eye level.
2. Laptop on lap eg. in bed or sitting on sofa. Where requirement is to keep your lap and the machine cool and ideally raise machine slightly for a more comfortable ergonomic position.
3. On a plane or train, where portability is most important, and ideally there will be no power drain as you may not be lucky enough to have power at your seat.

There are basically two types of cooling solutions,
Passive
Aluminium or plastic “rests” that lift the laptop up and enable better airflow.
Crystal phase change cooling mats, placed under the machine they draw heat away and the crystals inside melt to a fluid.
Active
Electrically powered fans in various configurations blowing air onto the laptop or sucking air away, like the picture above.

Experiments
Before buying anything I carried out some tests using my 17″ Macbook Pro and an old fan from inside a PC, which I re-wired to work with a simple USB power supply. I wanted to see the effect of blowing room temperature across the base of the machine, which gets too hot to touch. As the machine is all aluminium it conducts heat very effectively, so while there are clearly areas on the base that are REALLY hot it all warms up quite well. The hottest areas are towards the back of the machine, particularly the area in the vicinity of the power cable. The red areas on the photo below show where the MacBook Pro gets really hot.
The Mac design draws air from the rear of the machine and expels it through the gap in the hinge below the screen, so the metal area between the keyboard and screen gets very hot. The case is all aluminium, so the whole thing acts like a giant heat sync – which is good design, but not good for your knees!
See pictures below.

In short, blowing air reduces the temperature of the machine, and means that the fan speed inside the machine reduces lowering noise levels. Blowing air across the machine from the left rear was the most effective.
I also experimented with a couple of PC laptops. (A Dell XPS and an HP). The problem with PC’s is that they are all different, some have fans bowing hot air sideways out of the machine, some downwards, most are also plastic not aluminium, so will benefit less from blowing air over their surface. Clearly the best solution will be very much machine specific, as blowing air into a fan trying to expel air is not going to help.
See picture of HP machine with fan drawing air in from underneath and blowing hot air out of the side.

Passive experiments.
Placing a heatsink from an old PC processor under the machine directly contacting the base results in the heat sink warming up, but makes little difference to the running temperature of the machine. This tended to be the case with most of my passive experiments; the cooling device perhaps at best slowed the rate at which the Mac heated up initially. When heat sinks are used with processors, a good connection is achieved by using special conductive paste AND a clamp. Just resting one device on a heat sink will not come close to the thermal effeciency of that heat transfer. For that reason, and based on my experiments, all passive racks that claim to conuct heat away due to the “aluminum construction” must not work, especially as even the metal bodied laptops haver rubber or plastic feet that act as an insulator!
My conclusions were that a fan based approach was most effective and likely to be most practical.
After this I started to research commercial products. Most active devices have a one two or three cheap fans rather like the one that I had used for my experiments, in a plastic or metal frame blowing air upwards onto the bottom of the machine. Some more sophisticated machines suck air from the sides and blow upwards, making it possible to place the frame on your lap – or on the bed for example. A few suck air out from under the machine – and these would work much better for PC’s that have downward blowing fans.
One thing to watch is that devices with several fans can draw too much current from the laptops own USB ports and cause an overload that shuts down the port., so it is important to try the device with your machine.

£70. Designed for 17″ gaming laptops this has 3 fans, aluminium enclosure, heavy but folds in two, requires mains powered USB hub. This is VERY effective at cooling the laptop, as long as you have access to mains power for the USB, it has a variable speed control, and I rarely need it on full blast. The fans are toward the back of the machine, so perfect for the MacBookPro. Not practical for travelling or for on-lap use. I use this when I am setting up an all night job, eg. DNG conversions or batch HDR’s.
2. Targus 17″ Chill Pad, £20 two fans, designed for use on lap, soft neoprene padded bottom, air is drawn in from the sides, works with the Mac’s built in hub. This is very comfortable to use on the lap, or the desk and can run off the laptops USB port. There is no speed control but it is very quite. The positioning of the fans is ideal for cooling Macs, and works well with the HP too.

3. Phase change Chill Mat. (Various makes) $20. A rather heavy, floppy pad a little larger than a 15″ laptop, contains phase change crystals, that once heated turn to liquid. I tried this out on a flight from Boston to Heathrow. The laptop is simply placed on top of the pad, and the warmest areas “melt” the crystals first, so I kept moving the area of the mat under the hottest parts. After an hour and a half the mat was quite warm, and all the crystals had been turned to gel. At this point it no longer cools, the laptop and you have to wait for the pad to cool down again – which took about a hour! This mat also will only work if your laptop does NOT have a vent or fan underneath – it will just block the airflow.
This passive approach really has just one use – for short journeys – eg. commuting – it draws no power, is thin and easy to pack and works well for an hour and a half.

4. Rain design iLap. £60 This is a passive device made of the brushed anodised aluminium designed to compliment the MacBook Pro. It looks elegant and has a foam spongy front end for use on the lap – it is very comfortable. However there is no real cooling effect, other than it being better than having the laptop directly on your lap. The price is simply staggering and shows how gullible some people are buying this piece of lap jewelry! (Would anyone like to buy mine:-).

All the solutions here work to a degree, and have different compromises. One device stands out as ticking most of the boxes, the Targus Chill pad. It’s two fans, air drawn from the sides, comfortable bottom for the lap, works well with Mac or PC designs, and it’s a bargain at under £20. The only thing it is not good for is travelling – as it is rather bulky. For commuting I am using the phase change mat, I am less enthusiastic about that – it works for a bit, but nowhere near as good as fan based devices. 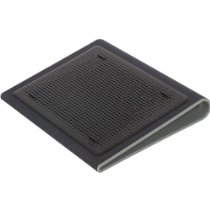 One thought on “Keeping Your (Laptop) Cool”