Should you reconsider using film in 2016? There is an increasing trend to buy vintage film equipment and shoot street photography and portraits with film. Prices are rising for quality film cameras, particularly for medium format but also iconic quality 35mm cameras from the major manufacturers. At Brighton & Hove Camera Club we have an annual “film day” where we spend the day taking film walking around Brighton taking pictures with film cameras and then show and judge the images at a subsequent meeting.

Both images below won their categories and the “man with the clothes” won the overall competition. ( The prize was a Reuters Press photography book). 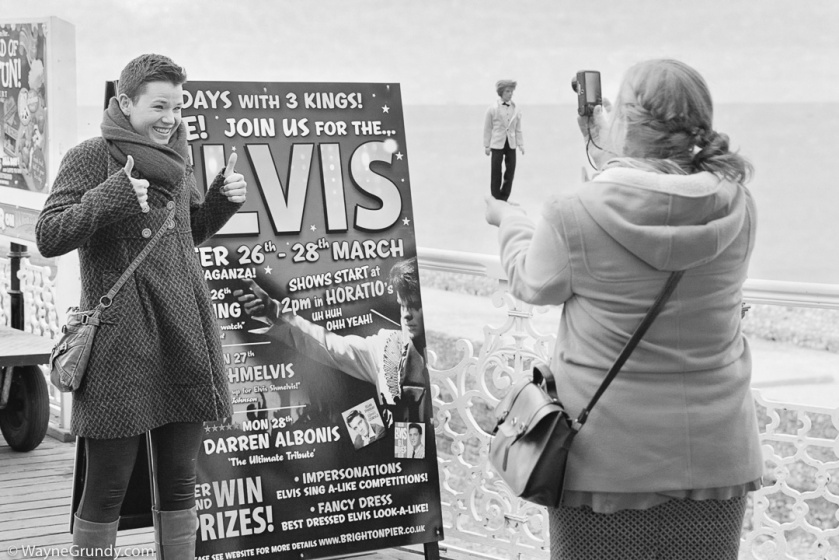 I have in the passed compared shooting film with digital in terms of resolution and ability for shooting in low light (digital wins easily). However I enjoyed shooting film again. I used Ilford XP2 Super which is very forgiving of exposure, and most importantly being a Chromogenic film with no silver particles, can easily be scanned

It is difficult to blow the highlights of this compared with digital. I scanned at approximately 4000 dpi for approximately a 24MP equivalent output. I was pleased with the results – inevitable grainy, somewhat soft look with lovely smooth tonality. Looking at 100% on the screen the scanned images look terribly grainy but once printed this is much less noticeable and really rather pleasant I think. I printed these at A3 and they looked superb.

The camera I used for these images  was the Canon EOS 3. Introduced in 1997 as a professional body, with a price to match, it had extraordinary technology including a 45 point autofocus system that could be controlled with the eye! It also had 9 point multi spot metering, up to 7 frames per second – all features that exceed the 2009 Canon EOS 5D mk2 for example. The EOS 3 is available for around £120 on ebay in mint condition, or around 160-200 with the extra battery grip. I have 3 these bodies now as I really enjoy using them. Coming from a 5D mk3, everything seems so “right” about this camera especially the handling, feel, grip (which I prefer to later Canon’s). The plastic body might put you off but it shouldn’t – this does not feel like a cheep entry level plastic DSLR.

Reasons for buying an EOS 3

1. It works with all my EOS lenses with full AF functionality and image stabilisation

4. Robust high quality body but much lighter than a DSLR

The bottom line is that if you are thinking about a film camera and you have Canon full frame lenses, this is a no brainer as it offers such great value for money.

Reasons not to buy an EOS 3

The EOS 1V was the top of the range in Canon’s lineup and the best film camera Canon made. It loses the eye control focus, but retains the 45 point AF system. It gains a more robust aluminium body, and it became the model for Canon’s pro 1DX models. The 1V is also compatible with infra red film. However it has three disadvantages over the EOS 3.